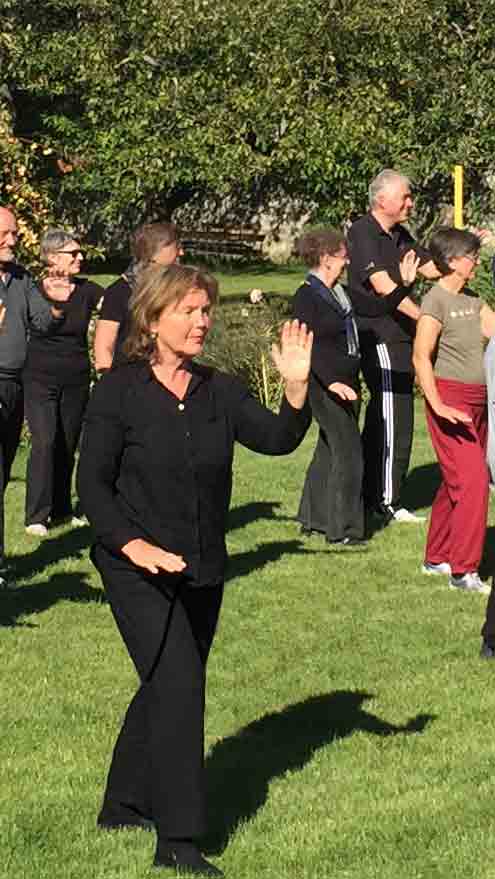 Our long-time T'ai Chi students know that Toyo and I had already set our own priorities during our joint teaching. With Toyo, it was his interest in the self-defense aspect of T'ai Chi Ch'uan, its techniques and the use and exploration of the inner energy. A knowledge from which we in our family, as well as, in our circle of students have profited to a great extent and still do so.

My own interest was primarily in practicing and exploring the forms. (Forms are the coherent movement sequences practiced in T'ai Chi Ch'uan). Although I had practiced with Toyo Push Hands (partner exercises) and the application of self-defense techniques for many years, my interest remained in practicing the forms. In the classes that Toyo and I did together over the course of four decades in seminars, weekends, and weekly groups, this division was often found. The books on T'ai Chi Ch'uan, published by Toyo and myself, reflect our joint learning and research.

In the teaching as it is given today by our family, as well as, our teaching students, we cultivate the knowledge brought in by Toyo.
Perhaps it could be expected that this is how we will continue in our circle now and in the future. However, the orientation of my practice had already opened for me an own approach into T'ai Chi Ch'uan.

While in the T'ai Chi - world possibilites are often searched for to make T'ai Chi faster more effective by adding other methods, for example in self-defense, this left me largely unimpressed. I saw an incentive in the sentence given by Yang Cheng Fu: "You practice the form and excellency comes by itself". The sentence motivated me to focus my practice primarily on the forms. I wanted to fathom the meaning of this sentence.

Such a practice can only be realized in a partnership if it is supported by the partner. That is what Toyo did. He promoted my path and thus had a significant part in it. His support was also essential because over years, as recommended by Fu Zhong Wen, I had started to practice the long form 10 to12 times a day, without interruption.

The approaches that this practice brought about are laid down in my book ”T'ai Chi Ch'uan and the 8 Directions - In Search of the Beginnings (2014)”. There, the course of my exercise path in the years 2000 to 2014 is presented - as far as, this is being convertible into book form. Among other things, it describes how an inner energetic structure was found in the human being. This explains the outer shape of the forms and their performance in a meaningful way. A structure that connects the trunk with the arms (in the so-called arm bow) and the legs (in the so-called leg bow). Uniform rotational movements of an inner energetic equivalent of the trunk, the so-called rotunda, lead the inner energy along the arm and leg bow following the millstone principle. This allows the movements of the trunk and limbs to be guided from the inside. A procedure as formulated in the classical treatises: mind - energy - body. Embedded in T'ai Chi's defining principles, such as its slow way of moving, this performance can be understood as an indication of the knowledge as it was given in the beginnings of T'ai Chi Ch'uan.

The inner performance gives room in an unique way to the implementation of high Taoist values, such as taking oneself back (withdrawal), letting it happen and unintentionality. The Taoist background of the T'ai Chi Ch'uan is thus filled with new meaning – as with the "T'ai Chi" it bears a synonym for the Tao (the Supreme-Ultimate) in its name.

The inner performance opens up a differentiated access to the partner exercises, the self-defense techniques in the forms, including the T'ai Chi sword art. The term "energy" (Cantonese: Ch'i) expands. A more refined approach to the realm of the immaterial, in which the life energy is integrated, opens up. Energy is no longer perceived as something that needs to be developed. It is more about providing an access to this energy which is given everywhere with an unimaginable power. An entrance which is built in the method of T'ai Chi Ch'uan.

Since 2016, therefore, we have not been in a completely new period. We have continued with what Toyo brought in with regard to T'ai Chi and passed on with what has flowed into our tradition since the early 1990s and then strengthened since 2000 through my approach. Since 2006, I have been working with advanced T'ai Chi students in seminars on the inner energetic performance in the context of a continuously practiced form called "Long Form 2". In many ways we orientate ourselves on the form of Yang Cheng Fu, the teacher of Cheng Man Ch'ing.